After a rash of string and array problems I thought we would take a break today and start discussing linked lists. To start out let's take a closer look at Leetcode 141 - Linked List Cycle

I will start this solution by assuming the reader understands the basics of a linked list and its implementation. If not that's okay. There are a wealth of resources on the topic (and I plan to cover this in the near future with my own implementation). But for now please go review resources (I recommend this) and feel free to come back one you've had a chance to learn/brush up.

As always let's look at the problem being asked:

Alright so some concepts are being throw out here. What exactly does a cycle mean in plain words? Well often a picture is 1000 words so lets take a look at one here: 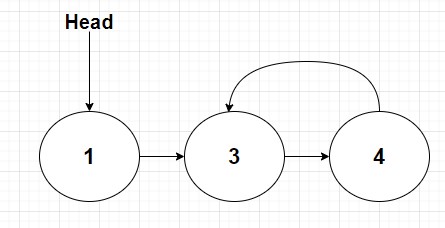 Now that we understand the formal defintion of what a cycle is how might be go about figuring out if a given linked list contains a cycle? We will look at two approaches here, one theoretically and one with a formal code solution.

If you mind initially went to hashing as you read the problem statement then the good news is you were correct! This is absolutely a viable approach to solving this problem! So what might hashing look like in this scenario? Let's look at a quick psuedocode solution:

Seems pretty straightforward and very similar to array problems we have worked previously. Basically if we come across the same node twice while looping through the linked list then we have found a cycle. From a complexity perspect we are at O(N), where N is the length of the entire linked list because intuitively we must always traverse the entire linked list to ensure whether there is actually a cycle or not. Space wise we also reach O(N) since the hash table similarly grows with the length of the list.

However there is a much simpler O(1) memory approach we can take. Let's now review the infamous Floyd's Cycle Finding Algorith.

This is actually a quite fascinating variation of the two pointer method that is used for many algorithms. Rather than maintaining a hash table of tracked nodes we initialize 2 additional pointers. One pointer is going to navigate the linked list slowly, or that is to say 1 node at a time 🐢. Another pointer moves twice as fast (2 nodes at a time) 🐇. How does this help us exactly?

Well imagine we are at a Nascar race (racing in loops for our F1 fans out there). Let's assume one car is racing at 50 mph. Another car has a much better day and is riding at 100mph. If both cars start at the same part of track when the faster car finishes a lap, the slower car is roughly halfway around the loop. The slow and fast car then meet again by the end of the track.

So this solution should look pretty similar to the first solution. We first do a base case check to see whether we can easily determine whether the list can never have a cycle. We then initialize 2 pointers and start looping through the list. Before comparing the pointers we move the slow pointer by one node and the fast pointer by two nodes. If the fast and slow pointer match we have found a cycle. Otherwise if the fast pointer is null then we know there are no cycles.

Completity wise we still remain at O(N). This is because even with two pointers we still could find the cycle at the very end of the linked list. However from a space perspective we have added 2 simple pointers which does not increase in quantity with the linked list size. Thus we now have reduced space complexity to O(1).

Thank you so much as always and best of luck exploring linked lists!